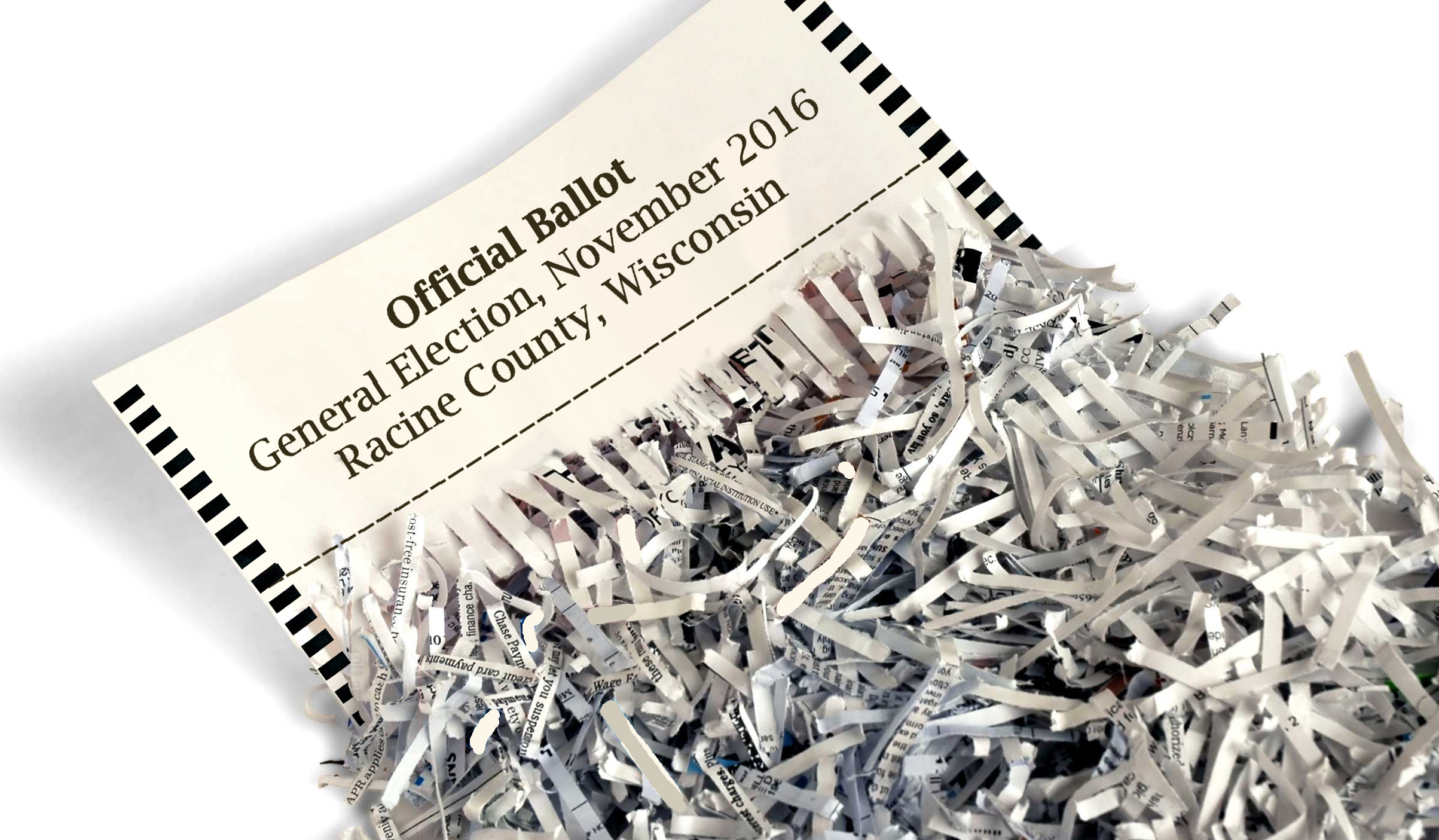 Our hand count documented: In the 6 audited wards, 1 in every 40 presidential votes remained uncounted as county officials declared results final. Results for individual wards and candidates are here.

“If an Elmwood Park poll worker had been grabbing the ballot from every twentieth voter and ripping it up, while county election officials looked on and did nothing, this result would have been pretty much the same.”

“The poll workers were not throwing out votes,” Racine voter Scott Farnsworth explained. “The problem is that county canvass officials have no process in place to notice or correct predictable electronic miscounts.”

Farnsworth participated in a hand count of ballots from last November’s presidential election, held at the Racine County Courthouse on November 14 and 15. County Clerk Wendy Christensen and county staff displayed the ballots to about two dozen volunteer vote-counters in response to Farnsworth’s open-records request.

The audit confirmed the group's suspicions: More than 1,000 Racine County voters may have been silently disenfranchised because of election officials' failure to check the accuracy of the computer-generated vote totals.

The Citizens' Audit was necessary because on Election Day, the voting machines indicated a weirdly high percentage of ballots contained no presidential vote. This is called the 'undervote' rate. But within two weeks, the County Board of Canvass had certified those totals as final--without checking their accuracy.

“A few voters always decide to leave the race blank,” explained Karen McKim, coordinator of the statewide group, “but not one in twenty. Anyone could see that those results were flawed before looking at even one ballot.”

Organized by Wisconsin Election Integrity and financed by a successful GoFundMe campaign, the citizens' audit counted votes from six wards.

The audit found that county-certified vote totals had missed 2.5% of the valid presidential votes across all six wards--1 in every 40 votes.

The highest error rate was in the City of Racine’s Ward 26, where election officials failed to count 6.1% of the votes, even during the recount. More than 1 in every 17 voters were disenfranchised in that ward. Detailed results are here, for each candidate and ward.

Wisconsin Elections Commission officials believe the voting machines failed to detect the votes because voters had marked ballots with types of ink that the machines could not detect. After other counties hand-counted the recount and discovered the high rates of missed votes, the WEC decertified the machines (prohibited their future use in Wisconsin) in late September.

County Clerk Wendy Christensen has not yet publicly explained why the county board of canvassers chose twice to certify the results as 'correct and true' without checking, despite the obviously suspicious number of missing votes.

"We needed the manual count to get the truth,” said Village of Pleasant Prairie voter Liz Whitlock, who was among the recount observers who could see the voting machines missing votes.

Racine municipalities are in the process of replacing the unreliable voting machines. However, new machines do not eliminate the need for routine accuracy checks. Any computer, including both new and old voting machines, is continuously at risk of producing flawed output. Threats include both sophisticated international hackers and more mundane problems such as human programming error and random computer malfunction.

What needs to be done--before November 2018!

Before the audit, Farnsworth had said, “The 2016 election is over and done. This is about our future elections.”

In Racine County, as in other Wisconsin counties, a county board of canvass bears responsibility for the accuracy of results in statewide races such as president. That board consists of the elected county clerk and an appointed representative from each of the two major parties.

Current state law leaves it to these county boards to select the procedures they will use to review and approve preliminary election results. Wisconsin's county clerks could, without any legislative action, start immediately to check accuracy.

At a minimum, they should follow the Wisconsin Election Commission's written advice to check to see whether "there is a large difference between the total number of voters and the votes cast" in the top-of-the-ballot race. WEC has already warned the county election officials that "a large drop off between these two numbers might signal a problem with the voting equipment." Because WEC has no oversight responsibility for the elected county clerks, citizen observation at canvass meetings is critical to ensure that county officials begin to follow basic instructions.

But Wisconsin candidates and voters deserve more than the minimum that our county officials can get away with.

In Wisconsin and elsewhere, local election officials cannot effectively prevent electronic miscounts, including hacking. Lacking IT expertise and authority to maintain full control of the software, they must rely on others—primarily voting machine vendors and service technicians—to maintain security.

But in states that use paper ballots—including Wisconsin—local election officials can detect and correct any miscounted preliminary election results, even if they cannot fully protect the voting machines or their software. By checking the vote totals against the paper ballots, they can prevent any miscounts or fraud from ruining an election.

And that is just what election-administration authorities recommend they do. In August 2017, the US Elections Assistance Commission wrote, “Carefully conducted post-election audits mitigate error and check the accuracy of election results. Comprehensive and transparent post-election audits raise the level of public confidence in the electoral process.”

Outside Wisconsin, other states are moving rapidly ahead to implement effective election-verification practices. Wisconsin’s county clerks could implement more prudent canvass practices now, with no change in state law.

We encourage every Wisconsin voter to contact his or her municipal and county clerk to demand verification before election results are declared final.

Here are links to more information about: