Double-check your ballot. Some NC voters say the machines changed their choices. 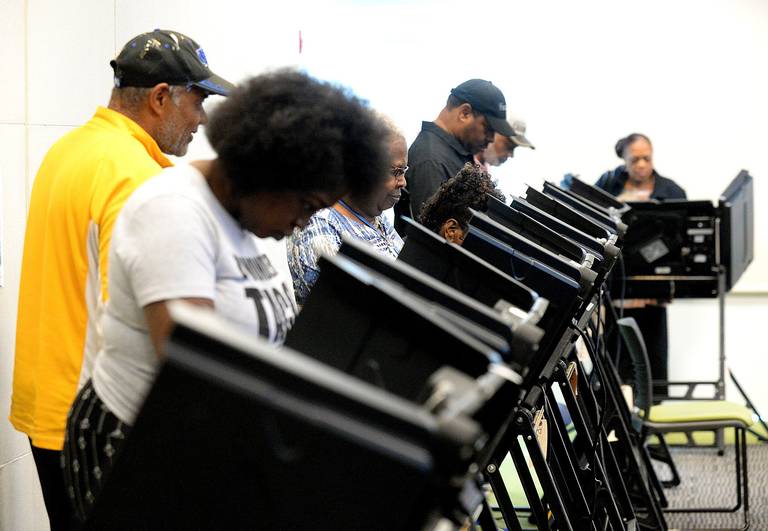 Two out of five North Carolina voters live in areas that use touchscreen voting machines. And some people have reported during early voting this year that those machines are changing their votes.

Election officials are quick to say there is no conspiracy to rig elections, nor any evidence of hacking, and that only a very small number of voters have reported having issues.

“It is not widespread,” said Pat Gannon, spokesman for the N.C. Board of Elections and Ethics Enforcement, although he said the state doesn’t track the exact number of complaints. “We get a few reports about this in each election.”

Several voters from the Charlotte area reported problems to The News & Observer, and the Greensboro News & Record reported on voters in Guilford County who said their votes were changed.

“We are concerned about going into Election Day,” said Reggie Weaver, civic engagement coordinator with Common Cause North Carolina. Weaver spoke on a conference call with reporters Thursday afternoon.

Older machines are to blame in some cases, election officials say, and voters simply have pressed the wrong button in others. Either way, it has drawn attention to the fact that people who use those machines need to double-check their ballots before submitting them to be counted.

About 40 percent of the state’s registered voters live in a county that uses touchscreen machines for some or all voting, a News & Observer analysis of elections data found. They’re not used in the Triangle but are in Charlotte, Greensboro, Winston-Salem and many smaller cities.

Charlie Collicutt, the director of the Guilford County Board of Elections, said some Greensboro voters tap the wrong part of the screen by accident. Others press the right one, he said — but because the borders that appear on the screen are sometimes slightly off from what the machine’s computer registers, the wrong selection will show up.

“This is a piece of technology that was engineered and made back in the early 2000s,” Collicutt said. “It’s not what you see today with newer technology. It’s 12, 14, 16 years old. ... It’s just not as fine-tuned technology as we have today.”

Soon, it won’t be an issue. All counties that use the touchscreen machines must phase them out by the end of 2019.

In the meantime, voters using touchscreen machines do have three chances to review their choices before submitting their ballots. Collicutt said because of that, most people who make errors catch them before making their votes official. He said there have only been a handful of cases in Guilford County — fewer than one for every 10,000 ballots cast so far — in which people have formally reported a problem with their ballot selections.Voters have a full slate of democratic candidates for Wake County Commissioner with a total of ten candidates vying for five seats. Several locations around Wake County offer early voting ahead of next week’s May 8th primary.

Kristin Mavromatis, the spokesperson for the Mecklenburg County Board of Elections, said that of the 80,000 or so people who voted in the first week of early voting, only four had complained about the touchscreen machines not recording their correct choices. She added that she expects more complaints to roll in after the election is over, all from people who can’t believe their preferred candidate lost. She said it happens after every election, even though there is never any indication of hacking or widespread innocent errors.

“It’s frustrating for us,” she said. “I have a bipartisan team of 40 people who test every single machine before we send them out.”

Gannon said there is no chance that electronic ballots anywhere in North Carolina are being hacked or rigged by some nefarious actor. The touchscreen machines “are never connected to the Internet, nor do they have wireless capability,” he said. “In fact, state law prevents it.”

Mavromatis said it’s simply an easy and understandable mistake, and most people who push the wrong button are able to quickly correct it.

“I don’t like to say it’s a user error,” she said. “Think about it on your iPhone. Take me for example. I’m left handed and sometime when I try to hit the M, I miss and hit the N.”

Mavromatis, Collicutt and Gannon all said that if voters do experience any issues, they should still report it to election officials so they can be aware of the issue and check to see if the machine is faulty.