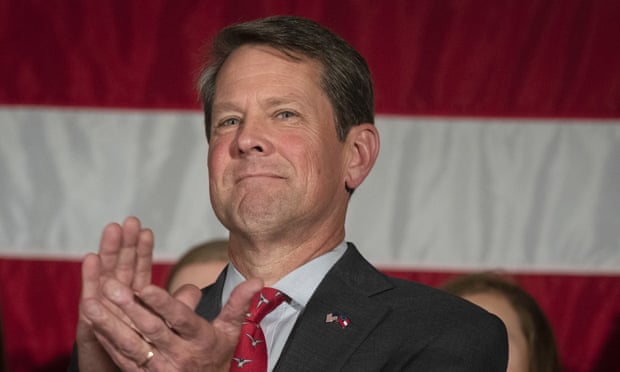 Greg Palast, a journalist and the director of the Palast Investigative Fund, said an analysis he commissioned found 340,134 voters were removed from the rolls on the grounds that they had moved – but they actually still live at the address where they are registered.

Palast and the Georgia Coalition for the People’s Agenda filed a lawsuit against Kemp on Friday to force him to release additional records related to the state’s removal of voters.

Under Georgia procedures, registered voters who have not cast ballots for three years are sent a notice asking them to confirm they still live at their address. If they don’t return it, they are marked inactive. If they don’t vote for two more general elections after that, they are removed from the rolls.

Georgia removed more than 534,000 voters that way in 2016 and 2017. Using databases employed by commercial mailing firms, analysts commissioned by Palast’s group found that 334,134 of those citizens actually still live at the address they registered.

It’s the latest voting rights controversy to crop up in the Georgia governor’s race, which pits Republican Kemp against Democrat Stacey Abrams, who if elected would become the first African American woman governor of any state.

Lawsuits have also charged that Kemp blocked the registrations of 50,000 would-be voters, 80% of them black, Latino or Asian, because of minor discrepancies in the spelling or spacing of their name. Another suit targeted the state’s most diverse county after it rejected an unusually large number of absentee ballots.

“Brian Kemp has abused his power as secretary of state of Georgia to purge the voting rolls of Georgia primarily of black and brown people,” said Joe Beasley, an Atlanta civil rights activist. “If he had one ounce of integrity, he would have stepped aside as secretary of state, because you can’t referee an election in which you stand to be a winner.”

Kemp’s office did not immediately return a call for comment.