If you vote by mail in Florida, it’s 10 times more likely that ballot won’t count 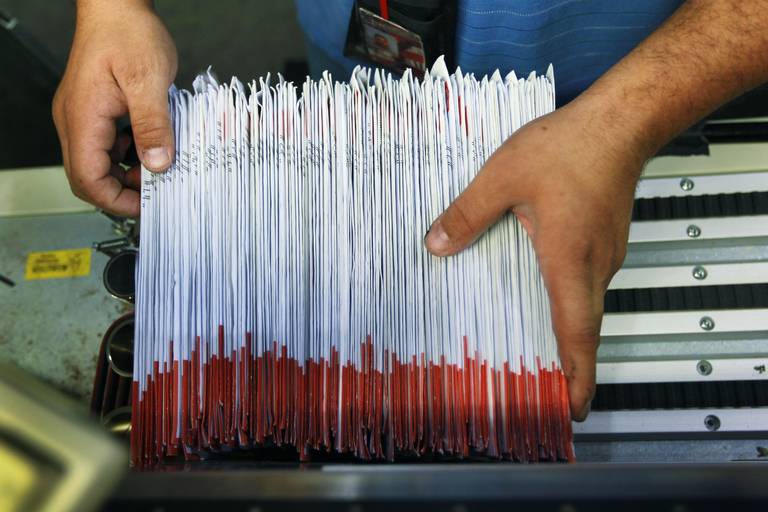 A study of Florida’s past two presidential elections finds that mail ballots were 10 times more likely to be rejected than votes cast at early voting sites or on election day.

The study also shows that rejection rates vary widely across the state.

The report was produced by Daniel Smith, chairman of the political science department at the University of Florida, on behalf of the ACLU of Florida, whose director, Howard Simon, cited the state’s “uncertain history in election administration” in a conference call with reporters.

About 1 percent of all mail ballots cast are rejected and not counted. Smith said that rate is about 10 times higher than for voters voting in person either early or on election day.

“This rate is substantial. We’re talking about tens of thousands of people,” Smith said.

The report comes as voting by mail continues to expand in popularity in the nation’s third most populous state. Two years ago, 29 percent of all ballots cast in the presidential election were cast by mail — 2.7 million out of about 9.6 million ballots — and election experts say the rate may be higher this November.

The rejection rates of mail ballots varied widely from county to county in 2016, the study found.

Smith noted that Miami-Dade County had one of the highest rejection rates in 2016 at about 2 percent (Broward was about 1.5 percent). Orange County was the highest at almost 4 percent.

Orange County Supervisor of Elections Bill Cowles issued a statement in response to the findings.

Shortly before the 2016 vote, U.S. District Judge Mark Walker issued an order requiring the state to direct counties to give voters a chance to fix a signature deficiency if they voted by mail. Walker said the laws governing voting by mail showed a “complete lack of uniformity.”

Yet the rejection rates for mail ballots cast by blacks and Hispanics went up between 2012 and 2016, Smith noted.

Secretary of State Ken Detzner issued a statement saying that the agency’s priority is ensuring that every vote is counted accurately, and it is the duty of the 67 election supervisors to carefully count all vote-by-mail ballots.

▪ There should be greater statewide uniformity in the design of mail ballots and the return vote-by-mail (VBM) envelope.

▪ There should be greater uniformity in the procedures employed by supervisors of elections, their staff, and canvassing boards to process, validate and, if necessary, cure VBM ballots.

▪ The Florida statewide voter history file (the FVRS database) should include information about why a voter’s mail ballot was rejected, including whether it was rejected because it lacked a signature or the voter’s signature was mismatched, and if the voter attempted to cure the VBM ballot if it was flagged as invalid.

▪ The October 17, 2016 memorandum to supervisors of elections from Secretary of State Ken Detzner should be revised to include specific procedures that county election officials should follow when notifying voters of a rejected VBM ballot and the cure process for missing and mismatched signatures.

▪ The Florida Division of Elections should study procedures for processing VBM ballots as well as procedures in place for voters to cure an invalid mailed ballot, promoting “best practices” from those counties with the lowest rejection and highest cure rates.

▪ The legislature should create guidelines for how supervisors of elections shall notify voters of their rejected ballot status and how voters can cure their VBM ballot prior to Election Day.