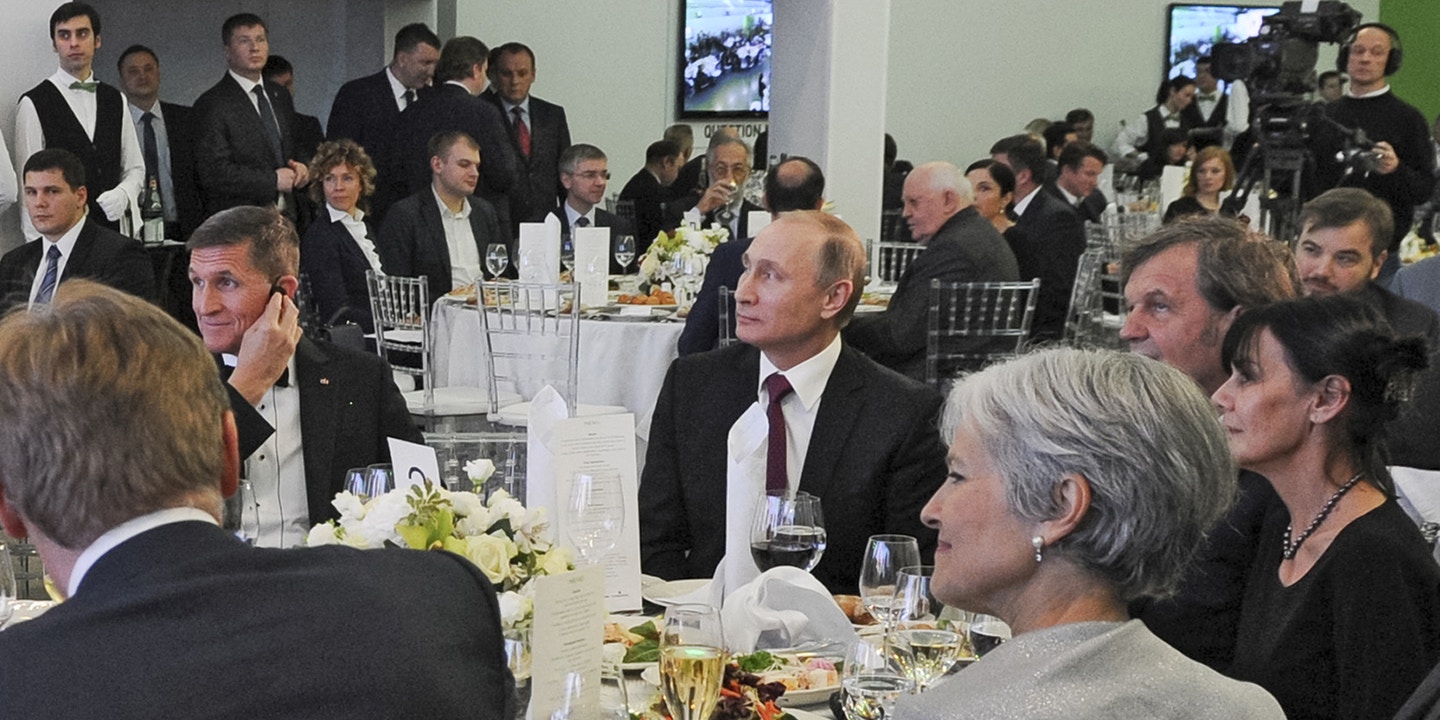 THE JILL STEIN campaign is refusing to comply fully with a Senate intelligence committee request for documents and other correspondence, made as part of the committee’s probe into Russian activities in the 2016 election, according to a letter to be delivered Thursday to the panel by an attorney for the campaign.

The Green Party campaign will agree to turn over some documents, but raised constitutional objections to the breadth of the inquiry, which was first made in November 2017, arguing that elements of it infringe on basic political rights enshrined in the First Amendment.

In the letter responding to committee chair Richard Burr, R-N.C., and ranking member Mark Warner, D-Va., Stein’s campaign has now said it will refuse some of the requests, calling them “so overbroad in reach as to demand constitutionally protected materials.”

The campaign provided that letter to The Intercept and it is posted below.

Mara Verheyden-Hilliard, of the Washington-based Partnership for Civil Justice Fund, authored the letter and responded to each of the six requests from the committee, saying the campaign would comply with some and not others.

For instance, the committee asked for all communications between the campaign and “Russian media organizations, their employees, or associates” between February 6, 2015, and the present.

Stein’s campaign is willingly providing these.

The committee also asked for communications from the “campaign’s policy discussions regarding Russia” during the same time frame.

Verheyden-Hilliard wrote that the campaign will decline to produce these materials “on the basis of constitutional privilege arising from the First Amendment to the U.S. Constitution.” She also wrote that internal campaign communications of this nature are “not pertinent to the subject of Russian interference” in the elections.

The letter says that if the investigators are interested in the campaign’s foreign policy plans, the Stein campaign is providing material related to those and there is also additional material available publicly on the internet.

Stein, who was also the party’s presidential nominee in 2012, traveled to Russia in 2015and attended a dinner marking the 10th anniversary of the Russian-backed news service RT. Russian President Vladmir Putin made an appearance at the event.

The committee also asked for communications related to any trips to Russia, including any discussion with Russian government officials, and the Stein campaign is willing to provide those.

The request also calls for “all communications with Russian persons, or representatives of Russian government, media, or business interests, including but not limited to any communications, discussions, or offers related to opposition research, from February 6, 2015 to the present.”

Stein’s campaign told The Intercept that they have already provided to the committee all communications with people affiliated with the Russian government and Russian media, but not with all people of Russian descent.

In the view of the Stein campaign, this is a request that unfairly puts all people of Russian descent under suspicion.

The campaign is adamant that it will “not be disclosing names of persons with whom they have ever communicated, including American political supporters, targeted because they happen to be Russian immigrants or of Russian descent. We reiterate here that the responding parties will not participate in a hunt for identification of persons based on nationality or descent.”

Former Salt Lake City Mayor Rocky Anderson also attended that RT event in Moscow, and told the Salt Lake Tribune that he believes the investigation into Stein’s campaign is “shameful.”

“Somebody could have picked up the phone and asked her, ‘Did you have your way paid?’” he said. “’Did you get anything of value out of this? Did they give you any instructions? Did they try to enlist you?’”

Jeremy Scahill did ask her, last June, on the podcast Intercepted. “They did not offer to pay me. They did offer to pay my way, and I said, ‘No, thank you,'” said Stein. “I would not accept money for transportation. They did not pay my hotel fare, either, at a Russian state hotel.”

The famous photograph, Stein said, tells more of a story than there was.

Stein: Let me just start with the mythology that this was an intimate roundtable. There were like 11 people at the table. I think only eight are shown in the picture because of the angle it’s taken from. And actually, if you look closely, if you blow up the picture, you’ll see there’s a chair between Michael Flynn and Putin, which was occupied by the head of RT. She happened to be introducing Putin at that moment. Putin and, I think, three rather strapping men kind of stormed in just before Putin was to give a speech, so they really weren’t at the table for very long. Maybe five minutes, maybe 20, tops. Nobody introduced anybody to anybody. There was no translator. The Russians spoke Russian. The four people who spoke English spoke English.

There was a guy sitting next to Flynn named Cyril Svoboda who was the deputy prime minister of the Czech Republic way back, and also the foreign minister, etc. He spoke both languages. And what I read afterwards was that he had briefly translated between Flynn and Putin, and it amounted to, “Hi, how you doing?” “Okay.” That was it. So, that was the great conversation. Nobody else talked to anybody across language barriers that I could see.

I assumed these were [Putin’s] bodyguards who came in with him. Turns out they weren’t his bodyguards. They were like his chief of staff and communications. But nobody cared to make introductions. This wasn’t intended to be a discussion of any sort. I spent just about the whole evening talking to the German former foreign minister sitting next to me, Willy Wimmer, and we had a very interesting conversation. But I think that was the only substantive conversation that took place around that table.

Scahill: And then Putin gets up to give his speech.

Scahill: And then does he return to the table?

Stein: No. Then they walk out. He was basically there to give a speech. This was not some kind of a dinner meeting. Nobody even met anybody. There were — I didn’t hear any words exchanged between English speakers and Russians.

The full letter to the committee is included below: 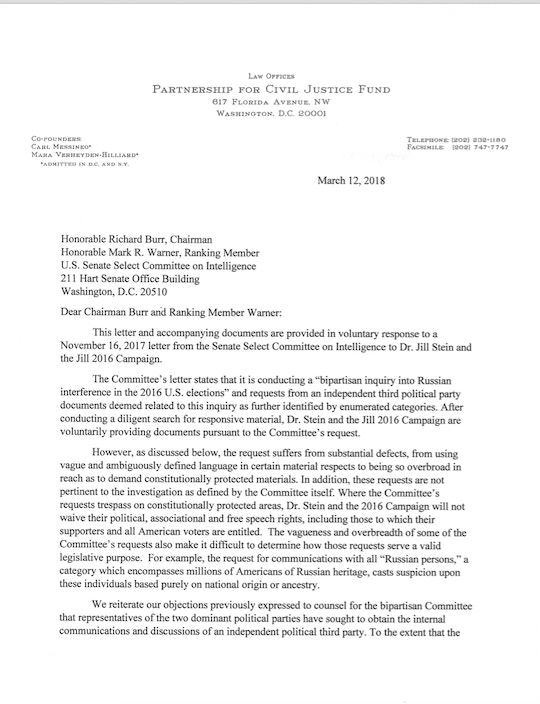 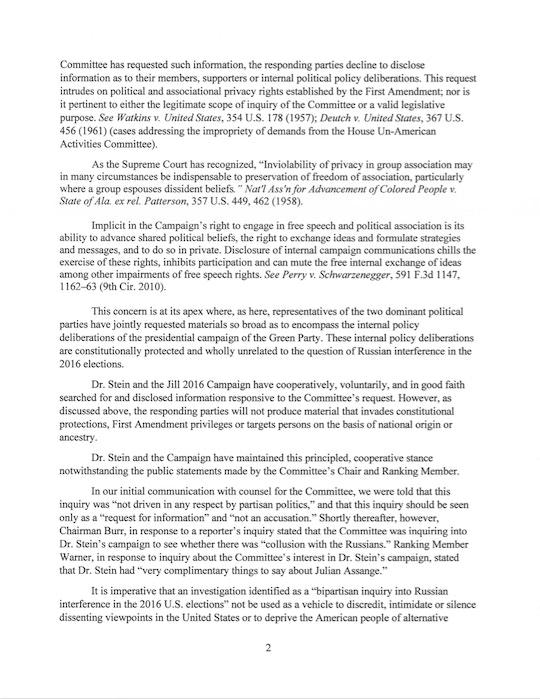