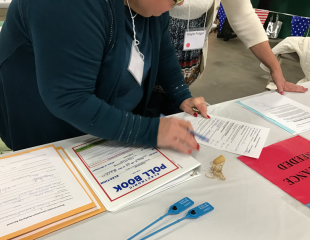 The Green Party’s best chance to overturn a statewide victory by Donald Trump has run into a swamp of dubious election protocols in Michigan, where Detroit officials said nearly two-thirds of the precincts cannot be recounted because of poor record-keeping on or after election night—presumably the rationale for a recount.

That unexpected hurdle, which was also present in other southeastern Michigan counties with communities of color such as Flint and Lansing and where Hillary Clinton won by the largest margins, emerged as the Trump campaign and Republicans pursued appeals in federal and state courts to block the recount. (Late Tuesday, the two courts issued contradictory rulings allowing it to continue.)

Meanwhile, in the state's legislature, a House committee passed a bill retroactively requiring the Greens to pay more for the recount.

“Donald Trump and GOP allies in Michigan are launching an attack against the recount, and attempting to strip the constitutional and civil rights of Michigan voters who are demanding that their voices be heard,” Jill Stein said earlier Tuesday. Her campaign is focused on verifying whether over 75,000 people did not cast votes for president in a state Trump leads by under 11,000 votes.

“In addition to verifying the reliability of our voting machines, this recount has begun to expose a modern-day electoral Jim Crow," Stein said. "Hand-counting the ballots has revealed many irregularities and red flags about the quality and maintenance of voting technology, the handling of ballots, and other aspects of election administration in communities of color. This raises serious questions about whether historically marginalized communities have been massively disenfranchised during this election.”

Meanwhile, in Wisconsin, where it does not appear Clinton will emerge as the winner in the recount, election integrity activists not working for Stein have discovered a serious security vulnerability to voting systems in many counties including Milwaukee, where ballot scanners have cellphone network SIM cards to transmit precinct vote totals to the county office. The state has said no Wisconsin voting systems are connected to the internet to guard against hackers, but one computer scientist who filed an affidavit supporting the Greens' lawsuit for hand-counting ballots said such connectivity was standard—and accessible to hackers.

“There are hacks involving the public switched telephone network that are quite distinct from internet hacks, but just as dangerous,” said Doug Jones, a University of Iowa associate professor of computer science. “I would not be shocked to find that the [ESS ballot scanner] DS200 is vulnerable to some of these, but I do not know it to be vulnerable.” In other words, Jones, who has studied voting machines for many years, said the election integrity activists have legitimate concerns, even if he has not seen counts compromised this way. "I don't find this surprising," he said. "It appears that numerous communications options are available, and Milwaukee has selected the one that doesn't require them to make sure that polling places have landlines."

The Green Party has launched presidential recounts in three states, which is unprecedented. In the third state, Pennsylvania, it filed a federal suit this week seeking to impound electronic voting machines to look for signs of tampering with vote totals. While many people outside computing circles dismiss that possibility, the Greens are pursuing and evaluating a complicated spectrum of political, legal and cyber tactics that could tilt the vote count. (In Pennsylvania, where top election officials have rejected this scenario, news reports Tuesday said Pittsburgh’s top prosecutor’s office was hacked last year and paid a $1,400 ransom to unlock its files.)

The recount’s biggest developments Tuesday were in Michigan, where the day started with the growing revelation that thousands of ballots in the counties most solidly behind Clinton were being deemed ineligible for the recount.

Trump leads here by less than 11,000 votes, promoting many observers to say that Clinton’s best chance to close that gap would be in Wayne County, home of Detroit, where she won by a two-to-one margin. But shortly after the recount began Monday, local officials discovered that many precincts would be excluded from the recount because precinct ballot totals didn't match the number of voters signing poll books.

“It’s not good,” Daniel Baxter, Detroit’s elections director, told the Detroit News Monday, saying that at least 87 ballot scanners failed on Election Day, with many jamming. In 392 of the city’s 662 voting precincts, vote totals recorded on the machines did not match the number of voters signing in, he said, disqualifying 59 percent of the city's precincts from the recount.

There were equally murky problems reported in other Michigan counties that disqualified precincts from the recount, explained local election officials like Barb Byrum, county clerk of Ingham, where Lansing is located. If there’s damage to the plastic containers storing the ballots, or if the seal number on the containers doesn’t match the poll books, “then there is a very good possibility that precinct will not be recountable,” she said. “The [state] Bureau of Elections is here to guide this process along.”

“In the first six hours of Ingham County’s recount Monday, six of 30 precincts from Lansing could not be recounted,” the Detroit News reported. “One of the ballot containers had a hole in it, making it susceptible to tampering and not recountable."

These disqualifications, which election observers from outside Michigan said were astounding as they underscore the reason for verifying the vote, are well-known to civil rights lawyers in Michigan, who for years have been urging the state to raise its standards. Outside lawyers observing the recount sent memos Tuesday citing Michigan election law (Sections 871 and 872, of Act 116 of 1954) that states, “Canvassers shall have full power and authority to subpoena witnesses and open any ballot box, regardless of the condition in which the same may be found, and may break open, if sealed, the seal thereon and examine the ballots.”

When asked about the apparent contradiction between recount practices in Detroit and surrounding counties, and Michigan election law, Fred Woodhams, spokesman for the Michigan Department of State, replied, “I want to check in with elections leadership about it. They are all at a court hearing right now. It is doubtful I’ll be able to respond to you today.”

That hearing, at the Michigan Court of Appeals, a three-member Republican bench, was the GOP’s latest attempt to shut down the recount. The appeals court held a hearing on lawsuits from Trump's campaign and state Attorney General Bill Schuette, who are arguing that the recount should end because Stein's petition was “deficient” and because she “has no possible opportunity to win Michigan’s electoral votes.”

The Greens, however, want to know why there were 75,335 “undervotes” in the state, or ballots that were filled out except for the selection of president. “Many of these are in Oakland and Wayne counties, which include Detroit, raising the very real possibility that communities of color may have been disenfranchised by an unreliable counting of the votes,” the Green Party Tuesday press statement said. “The number of under-votes exceeds by several-fold Trump's margin of victory in the state.”

Late Tuesday, the Michigan appeals court directed the Board of State Canvassers to reject Stein's recount petition, but did not order the recount to be stopped, because as numerous experts have pointed out, their hands are tied by a U.S. District Court ruling ordering it to commence. Later Tuesday, that federal court also said the recount should continue.

The Greens were anticipating they might lose in state appeals court and be forced to take their fight to Michigan’s Supreme Court. On Tuesday, the Stein campaign filed papers to disqualify two Michigan Supreme Court justices from hearing cases related to the recount.

“Chief Justice Robert Young Jr. and Justice Joan Larsen have been mentioned by Donald Trump as potential nominees to the U.S. Supreme Court, and their involvement in the case would create an appearance of impropriety,” the summary said. "[Both justices] have a substantial personal and professional interest in the election of Trump as president and in conducting themselves in a way which is favorable to him and/or hostile to, among others, other candidates for president," wrote Mark Brewer, Stein's lawyer.