State audit: No evidence of fraud in Detroit vote 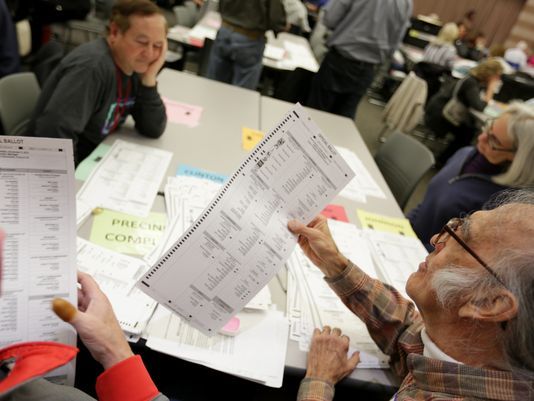 The problems were discovered during a statewide recount of the presidential race requested by Green Party presidential candidate Jill Stein. One of the chief things learned from the three days of recounting in 26 counties was the sheer number of ballots that couldn't actually be recounted because of mistakes in the way the ballots were recorded or because of ballot containers that were improperly secured.

As a result, the state Bureau of Elections audited 136 precincts in Detroit that couldn't be recounted. One precinct  — Precinct 152 — brought the problem to light when 52 ballots were discovered in a ballot container, but 307 votes had been logged in the poll book. Other precincts audited had similar problems.

"The audit found that the precinct imbalances, which did not affect the ability of Detroit residents to cast a ballot and have their vote counted, almost entirely were caused by precinct worker mistakes," the state's audit said.

Detroit City Clerk Janice Winfrey did not return a call to respond to the state audit.

Problems included not properly using electronic polling books, leaving counted ballots in the tabulator bin instead of in a sealed container and incorrectly recording or issuing provisional ballots. Elections staff were able to bring 65 precincts into balance, and the total number of ballots in question was reduced to 200 out of 250,000 ballots cast in the city.

The state will work with Detroit city election officials to expand and improve training of election workers, including:

“The city of Detroit and the entire state have made progress in election administration in recent years, but this audit highlights key areas in need of improvement,” Secretary of State Ruth Johnson said in a statement. “I have directed Bureau of Elections staff to assist city election officials in making needed changes to poll worker training and recruitment efforts. Voters in Detroit and across Michigan deserve no less."

Across the 26 counties that had begun recounting the ballots, 322 precincts couldn't be recounted. The partial recount showed Democrat Hillary Clinton narrowed her loss to Republican Donald Trump by 103 votes after about 2.1 million ballots were recounted.

But since the recount was stopped by the courts before it was completed, the election results certified by the Board of Canvassers on Nov. 28, which showed Trump winning by 10,704 votes over Clinton, stand.

During the election season and since winning the 2016 election, Trump has repeatedly said that the election was rigged and that the only reason he lost the popular vote by nearly 3 million votes was because of a massive amount of voter fraud.

Thomas told the committee Thursday that’s not the case in Michigan.

“We certainly have no massive or pervasive fraud in Michigan. It just really doesn’t happen,” he said. “There were some incidents this year of double voting," people voting both by absentee ballot and at precincts on Election Day, "but those are very small numbers.”

As part of a review of the Nov. 8 election, the Secretary of State's election staff found 31 people voted twice, including 14 in Detroit — once by absentee and once in person at the polls. Those cases have been turned over to the Michigan attorney general for a criminal investigation, which could result in felony charges punishable by up to four years in prison and a $2,000 fine.

"It’s not acceptable, but we’re not concerned that this is pervasive fraud by any stretch of the imagination, and there are processes in place to stop this," Thomas said. "The clerks have been put on notice that their efforts need to be redoubled, and they need to be really careful."

The state purges its voter files every January of voters who have died or moved. This year, 155,000 people were removed.