Voting Problems Surface as Americans Go to the Polls 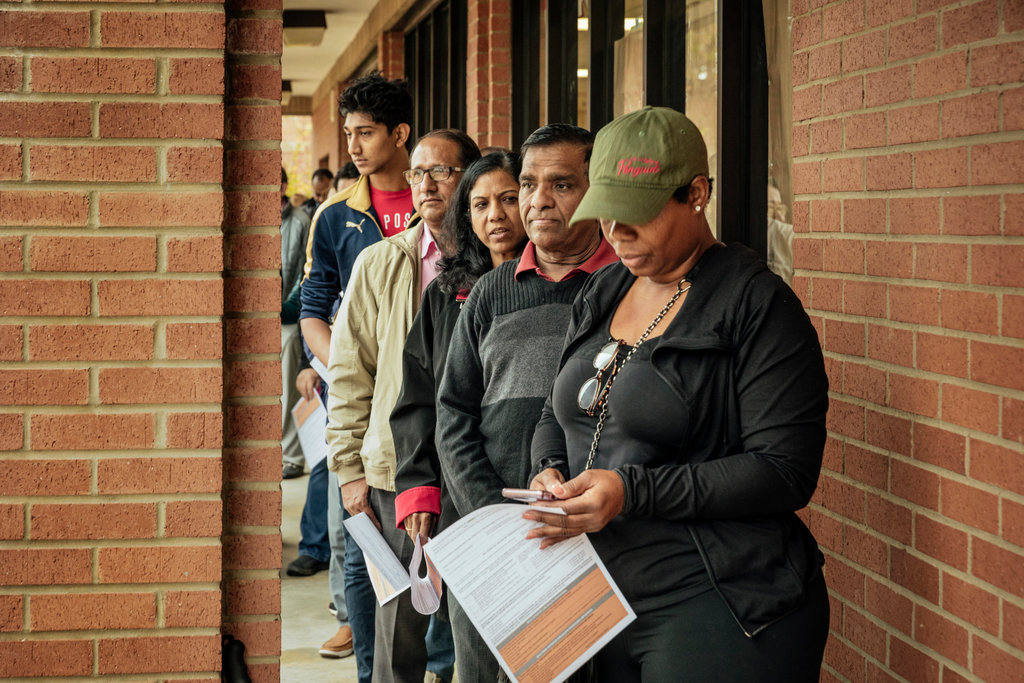 From closed polling sites to malfunctioning machines, Election Day brought frustration for some voters in contests shadowed by questions about the security and fairness of the electoral system.

In Gwinnett County, Ga., four precincts — out of 156 — suffered prolonged technical delays, while some voting machines in South Carolina lacked power or the devices needed to activate them. There was also some confusion in Allegheny County, Pa., which includes Pittsburgh, where at least four polling places were changed in the last two days.

Voters who went to a polling place in Chandler, Ariz., a Phoenix suburb, found the doors locked and a legal notice announcing that the building had been closed overnight for failure to pay rent. (Officials later reopened the location.) In Houston, a worker was removed from a polling site and faced an assault charge amid a racially charged dispute with a voter, The Houston Chronicle reported.

Problems with casting ballots are a regular feature of Election Day, and making sense of them could take days and weeks. But the number of calls to voting hotlines maintained by a collection of advocacy groups quickly outpaced those received in the last midterm election of 2014.

The Lawyers’ Committee for Civil Rights Under Law, a nonprofit group that oversees 20 election call centers, said that as of 5 p.m. Tuesday it had received 24,000 phone calls, compared with 14,000 at the same time four years ago.

[See the results for the House of Representatives, the Senate and governors’ races, and read our analysis.]

Any issues experienced this year are more likely to jangle an electorate already unnerved by the fraught 2016 election, whose aftermath has been picked over amid concerns of Russian interference and President Trump’s repeated warnings, without evidence, of widespread voter fraud.

Tensions have also been exacerbated amid a fierce battle over how easily Americans can register, vote early and gain access to polling sites. Election experts point to declining enforcement of rights for minority voters since the Supreme Court struck down the core of the 1965 Voting Rights Act five years ago.

Various problems led to extended hours at locations in several states. In Texas, a judge ordered nine polling locations in Harris County to remain open an extra hour after civil rights organizations complained. A coalition of groups was seeking the same in Maricopa County, Ariz. And, in Georgia, a local judge kept several sites in Gwinnett County open, including the Annistown Elementary School, where voting was extended by more than two hours.

A handful of precincts were also held open for several hours in Fulton County, which includes much of Atlanta. One of the precincts was Forbes Arena, which hosted a rally last Friday featuring Stacey Abrams, the Democrat seeking to become the first African-American woman elected governor in any state, and former President Barack Obama.

Georgia’s elections system was a highly contentious issue during the campaign between Ms. Abrams and Brian Kemp, her Republican opponent, who is also the secretary of state and thus the state’s chief elections administrator.

Ms. Abrams and her allies accused Mr. Kemp of trying to suppress the vote through overzealous interpretations of state laws and procedures. Mr. Kemp argued that he was simply trying to make it “hard to cheat,” and called accusations of voter suppression a “farce.”

Although long lines were reported at some polling places, other Georgia voters moved in and out with ease. “It’s been very smooth all day long,” Mr. Kemp said Tuesday afternoon, adding: “We’re getting the normal questions of people calling asking where do they go vote, are they registered. Nothing unusual at all.”

But some Georgia voters had a much different experience.

At Annistown Elementary School in Snellville, Ga., in Gwinnett County, voters reported standing in line for hours amid problems with voting machines.

One resident, Ontaria Woods, said it took her nearly five hours to vote after arriving around 7 a.m., when the polls opened. After about 30 to 45 minutes, poll workers alerted those standing in line to an issue with the ExpressPoll voting machines, she said.

“People were not surprised,” she said. “Of course, the term ‘voter suppression’ was used many, many times.”

Several voters declined provisional ballots after worrying that they would not be counted, she said, and some left to buy food and water from a Walmart. The machines were finally fixed around 11 a.m., and Ms. Woods cast her ballot about 45 minutes later before heading to work — hours late.

Gwinnett, a rapidly diversifying patchwork of suburbs near Atlanta, has long been a Republican stronghold, but Hillary Clinton carried the county in 2016.

A spokesman for the county government, Joe Sorenson, said the four problematic precincts reported issues with the system that creates voter access cards for Georgia’s electronic polling system. A judge extended hours at several locations in the county, including one that was to remain open until 9:25 p.m., well past the planned 7 p.m. close.

Bradford Berry, the general counsel of the National Association for the Advancement of Colored People, said, “We need to make sure that the machines that are breaking down in Georgia are not in certain parts of town, and not in others.”

Although county elections officials appeared at fault for some of the issues in Georgia, a spokeswoman for Ms. Abrams’s campaign, Abigail Collazo, put the blame on Mr. Kemp.

“We’re incredibly inspired by how many Georgians are turning out to vote and are staying in line to cast their ballot, despite the fact that some polling locations were not properly prepared by the secretary of state’s office,” Ms. Collazo said in a text message.

In Arizona, voting-rights monitors reported major delays at some sites because of problems with printing ballots. The complaints centered in Maricopa County, the state’s most populous county, where a shift from local polling places to regional voting centers caused chaos two years ago.

Voters at the regional centers were being turned away or endured long waits after printers that produce ballots tailored to their home precincts malfunctioned, according to Common Cause, which was monitoring polling problems.

In South Carolina, a spokesman for the State Election Commission said problems with malfunctioning voting machines were limited.

“These issues were attributable to human error in preparation of the system, and in most cases, were resolved earlier this morning,” the spokesman, Chris Whitmire, said in an email.

At least two polling places on the Standing Rock Sioux Reservation in North Dakota ran out of preprinted ballots, forcing the Sioux County auditor, Barbara Hettich, to make photocopies. Matt Samp, an organizer with the advocacy group Four Directions, said that he had asked Ms. Hettich a week ago to print more ballots, but that she insisted she had enough.

The polling place in Cannon Ball, N.D., started the day with only 195 ballots for a voting-age population of more than 500. Midway through the day, Ms. Hettich had to make 100 more. In Porcupine, the precinct was down to three ballots before more arrived. Mr. Samp said a Four Directions worker drove the copies from Fort Yates to Porcupine — about 30 miles — because Ms. Hettich’s office did not have anyone available to do it.

Reached Tuesday night, Ms. Hettich said only that she had shipped the new ballots in time.

The Justice Department deployed election monitors to 35 jurisdictions in 19 states, but Jeff Sessions, the attorney general, drew concern among Democrats for emphasizing fraud as well as civil rights.

“We are dealing with a very different climate in 2018,” said Karen Flynn, the president of Common Cause. “We do not have a Department of Justice that is working hand in hand with our network to be solving these problems, we don’t have the protections of the Voting Rights Act, and we have a president that is putting out messages that can feel threatening to many voters.”

In El Paso, the federal Border and Customs Protection agency abruptly canceled an exercise along the Mexico border Tuesday morning after civil-rights groups and Democratic leaders complained of voter intimidation. The crowd-control exercise would have taken place near a border crossing adjacent to the heavily Latino Chihuahuita neighborhood, and less than a half mile from a polling station used by Latino voters.

“It was just really ham-handed and insensitive at the minimum — and possibly worse,” said Nina Perales, the voting rights legal director at the Mexican American Legal Defense and Educational Fund.

Not all problems were as sinister as some feared. A viral video at a polling site in Columbus, Ohio, showed a voter casting an electronic ballot for the Republican candidate for governor, Mike DeWine. But the paper record in the video shows a vote cast for Mr. DeWine’s Democratic opponent, Richard Cordray.

The account that posted the video on Facebook claimed it showed a “rigged” machine. A spokesman for the Franklin County Board of Elections, Aaron Sellers, said that the machine in question had been experiencing a paper jam, which caused a previous voter’s paper record to print.

The voter was allowed to recast her ballot on a working machine, but the video was shared thousands of times on Twitter, often by people referring in their profiles to QAnon, a sprawling pro-Trump conspiracy theory.