Was the Heated 2016 Democratic Primary Rigged for Debbie Wasserman Schultz? 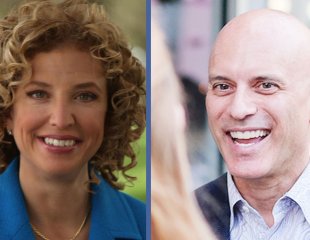 Just weeks earlier she had been forced to resign as head of the Democratic National Committee after stolen emails showed her talking smack about Senator Sanders and leaning on the scales in favor of her ally Hillary Clinton. Canova focused the national outrage against her, raising over $3 million, and turning the congressional election into a referendum on her policies and ethics. But with a 13.5% victory she overcame questions about her political viability and returned triumphantly to her job in Washington.

With the nation fixated on the Alabama Senate special election and daily talk of interference in the 2016 presidential race, securing elections and verifying the accuracy of the vote has captivated the public.

On Thursday, an election transparency lawsuit was filed to preserve digital images of the ballots in the Alabama Senate race. And in a hearing in Broward County Florida, last month, a year-long battle to view the ballots in the race between Wasserman Schultz and Canova came to a head with a surprising admission by the Broward County Supervisor of Elections’ office. In violation of both federal and state statutes that require federal election materials be preserved for 22 months, their office destroyed the ballots from the Wasserman Schultz/Canova race after only 12 months. Broward County Supervisor of Elections Brenda Snipes personally signed off on the ballots’ destruction.

According to a transcript of the November hearing, the attorney for the Supervisor’s office Burnadette Norris-Weeks claimed the ballots were destroyed, “Because they can't just store hundreds and hundreds of thousands of boxes.

It’s possible that lack of storage space is not the only reason Broward County officials wanted to destroy the ballots. Months of investigating the Supervisor’s office and analyzing election data reveal that in the vast majority of precincts in the race, the number of cast ballots does not match the number of voters who voted.

Duncan Buell, a professor of computer science at the University of South Carolina, said, “I see what I would call a high likelihood of massive incompetence. Either that or there is fraud. I don’t think you should see numbers this big in this many precincts.” Buell has examined election records extensively in South Carolina.

Douglas Jones, a computer science professor at the University of Iowa sputtered in disbelief at the data. “This is really weird.” He continued that they ought to be reconciling the number of voters with ballots and if they’re not doing it, “they’re grossly negligent.” Jones served on the Election Assistance Commission’s Technical Guidelines Development Committee for four years, but said “I’ve never seen a county that looks like this.”

Canova is not the first one to take the Broward County Supervisor of Elections’ office to court. He is in line behind the Republican Party that sued in November of 2016 over absentee ballots being opened in secret, and a not-for-profit that sued in October last year when Broward County left a medical marijuana amendment off some ballots.

Problems with the county’s elections go further back than that. In 2006, according to documents provided by the Florida Fair Elections Coalition, the Broward County Supervisor of Elections’ office admitted to a “loss of data” that included over 100,000 ballot images.

Ballots not matching the number of voters has surfaced in other states. In Wisconsin, the issue happens frequently enough that there is a statute (7.51 (2)(e)) on how to handle it, and the solution might surprise you. If there are more ballots than voters, officials are instructed to randomly pull out and throw away ballots until the numbers match.

After almost a year of wrangling with the Supervisor of Elections’ office, we were allowed a ballot inspection on November 1st and 2nd.  We arrived to find that there were no actual ballots to be inspected. The county instead insisted on showing us digital scans of ballots. In the subsequent court hearing they admitted they destroyed the originals.

We had already looked at the voter lists. The point of the ballot inspection was to see if there were also disparities in the vote count itself. We received printouts of scans for five precincts. In three of the five precincts, there were differences between the scans and the certified totals. In one case the difference was more than 1%. Based on the margins in this race, that type of shift is not large enough to change the outcome. However, since the original ballots, the totals tapes, and all associated paperwork have been destroyed, there is no way now to verify that these scans, or the votes on them, match the original ballots. The county hired an outside agency, Clear Ballot, to do the scanning – raising chain of custody and security issues as well. Who had access to the ballots? Who had access to the scans?

The large discrepancies between the number of voters and the cast ballots, plus the inability or refusal of the Supervisor of Elections’ office to produce the original ballots, all raise questions about what the true totals for the race may have been. Experts we consulted concurred that the certified results must be considered suspect. “They destroyed the evidence,” said Karen McKim, a member of the Wisconsin Election Integrity Action Team and a veteran of handcounts in that state. “They can’t defend their results.”

The Broward County Supervisor of Elections’ staff refused to answer questions during the ballot inspection, so it was not possible to ask them to explain the problems with their data. They are being deposed in regard to the destruction of ballots, and could be subject to criminal prosecution. The printouts of the scans were sealed and sent to Columbia County, New York, in case further examination is useful.

Academics and election officials who regularly examine this type of data offered a myriad of potential reasons for the large discrepancies between the voters and the ballots, but were universally dismayed.

When asked if there was a reason for that type of gap Columbia County New York Election Commissioner Virginia Martin replied, “Not a good one.” She suggested that a crush of new voters at the polls could result in a lot of spoiled ballots, but said “If this were happening in my county I’d want to investigate it.”

Professor Buell described a packed election with seven-hour wait times in South Carolina where he had witnessed voters leaving after signing in. That resulted in more signatures than ballots in some precincts. But he could not recall seeing anything comparable to the numbers from Broward. He also noted the light turnout in this race and said the discrepancies were “unlikely to be attributable to long lines.”

Susan Pynchon, executive director of the Florida Fair Elections Coalition, expressed frustration that when conducting citizen audits on elections, it was not unusual for them to see counties where the numbers did not add up. One explanation she had received in Volusia County was that they don’t put police officers, firefighters, and judges on the disk of voters. Jones was uncomfortable with that practice saying, “Reconciling the number of ballots with the number of votes is such a fundamental protection of democracy that that is just giving the government the right to rig elections.”

A November article in the Christian Science Monitor brought to light some disturbing facts about the Broward County voter database:

The Monitor explored various security risks facing Broward County elections—including the fact that its election systems and registration database are provided by VR Systems, a company that was compromised by hackers in 2016. Russia, North Korea, Iran and China were all put forward as foreign adversaries that could potentially disrupt or manipulate an election. But Pynchon offered a more mundane risk, closer to home. She pointed to a “ballot on demand” machine available at every early voting site that is capable of printing out ballots for any voter in any precinct.

The machines solved a major logistics problem for early voting, but she is concerned that there are not enough safeguards in place to protect against their abuse. She described how multiple ballots can be printed with the bubbles already filled in for candidates, and ended by saying, “An inside job would always be easier because you have access to all the tools you need.”

Wasserman Schultz claims she is looking forward to the upcoming contest against Canova, saying in a June email, “I embrace it as a chance to continue to talk directly with voters.” Canova has made no secret of his opinion of Wasserman Schultz. Following the election, he refused to make a concession call saying, "I'll concede that Debbie Wasserman Schultz is a corporate stooge."

Snipes, the current Broward County Supervisor of Elections presided over the first race. She has a four-year term, so unless she is removed from office for misconduct (something the Florida constitution allows the governor to do) she will also preside over the rematch.

Lulu Friesdat is an Emmy award-winning journalist whose many news assignments include producing election coverage for MSNBC and editing with the CBS Evening News and Good Morning America. She received a Best Documentary award for directing her first feature-length documentary, Holler Back: [not] Voting in an American Town. Follow her on twitter @LuluFriesdat.